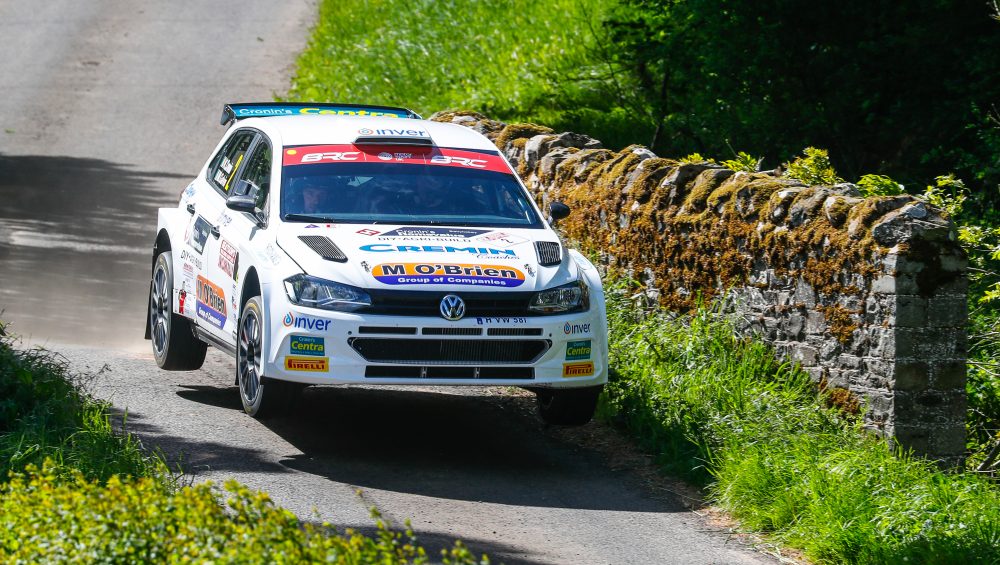 The Beatson’s Building Supplies Jim Clark Rally made a welcome return to Duns in the Scottish Borders this weekend [27-29 May], as the popular motorsport event blasted back into action with three days of top-level rallying in the region.

A sensational array of drivers from across Europe and the UK took part in both the Jim Clark Rally and Reivers Rally, with around two hundred and forty crews tackling the closed public roads in Berwickshire.

Sponsored by leading construction merchants Beatson’s Building Supplies, the rally returned after a two-year sabbatical but retained many of the features of past events which has heritage back to 1970.

It was the BRC contenders that would predictably see the biggest battles played out over the first two days as some of the best drivers in the country and beyond went head to head on the tricky Borders roads for the first time this decade.

Friday night provided a double run over the Longformacus stage and it was Irishman Keith Cronin who set a blistering time over the first pass, eight seconds faster than round one winner Osian Pryce. Winner of the event in 2012, Cronin and co-driver Mikie Galvin were in a league of their own by the time the stage ran again in the dark, heading into day two with a 40 second lead in their Volkswagen Polo GTi R5.

Saturday saw him maintain that gap to his nearest challengers James Williams and Dai Roberts in their Hyundai i20 R5, who would take second spot after a gutsy drive, whilst the podium places were rounded out by Duns driver Garry Pearson in his Fiesta Rally2 and co-driver Dale Furniss.

“It feels great, it’s so nice to get a BRC win again,” said Cronin at the finish celebrations in Duns town square.

“Last year didn’t go one hundred per cent to plan for us. So, it was encouraging to see the pace at Clacton and after we started so well here [Jim Clark Rally], it was all about managing the lead.”

“We had to keep our pace up. Today we weren’t quite as flat out as last night, you just can’t let go of the concentration with the level of competition in the British Championship. You start hearing noises & listen out for punctures but it all came good, it was nice to get the win.”

The race to be the top non-BRC crew home centred around the National Asphalt Championship and it would be Steve Wood and Dale Bowen who took the win in their Fiesta WRC.

However it was Duns ace Euan Thorburn who led for most of the day before a hydraulic pipe failure forced him out on the final stage of the rally. Having been out of the driver’s seat for over two years, the local ace would be able to repair the Focus WRC to contest Sunday’s Reivers Rally.

Pearson would have the honour of the leading Duns driver home, with fellow local Dale Robertson enduring a tough day in his Fiesta Rally2 to finish down in 45th after getting stuck in a ditch. Cornhill’s Michael Binnie took Duns co-driver Claire Mole to sixth in their Mitsubishi whilst St Boswells resident Ross Hunter finished just outside the top 10 in eleventh with Martin Woodcock alongside.

With the Jim Clark Rally done, attentions turned to the Reivers Rally on Sunday and the KNC Groundworks Scottish Rally Championship contenders would be all aiming for a maximum points haul on their first visit to asphalt in 2022.

But it was Euan Thorburn who was looking for redemption after his last-minute retirement the previous day, stopping the clocks on an equal time with Rory Young in his Fiesta Rally2 on the first stage of six.

Heading into the mid-point service halt, Thornburn and co-driver Paul Beaton opened out a 13-second lead to David Bogie and John Rowan in the raucous MINI WRC and the two crews would fight it out over the final three tests.

Thorburn did enough to keep Bogie at bay in the afternoon loop taking a superb win on his home event, adding to his 2012 victory on the rally. Bogie’s result would also give him maximum points in the Scottish Rally Championship.

Steeped in history, the Jim Clark Rally first ran in 1970 and has remained one of the most prestigious stage rallies in the country. Names on the winner’s trophy include Roger Clark and Ari Vatanen. The event is named after Jim Clark OBE who was a two-time Formula One Champion, a winner of the Indianapolis 500 and a host of saloon and touring car races and hailed from Chirnside.